Streetism; A Fight Worth Fighting 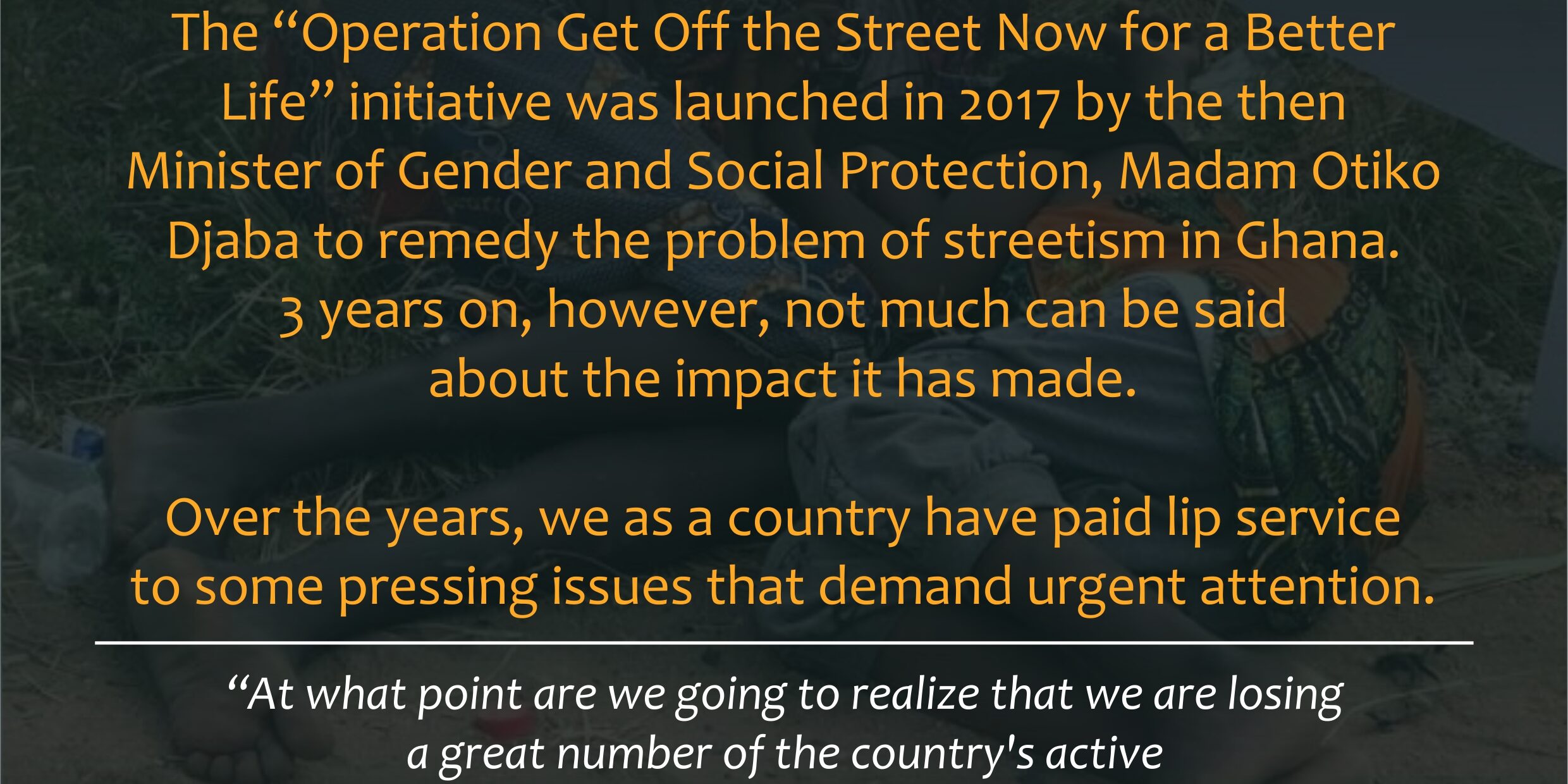 The world continues to battle the novel coronavirus and its adverse effects on governance and socio-economic activities. Though vaccines have been produced and mass vaccination currently ongoing, life has not returned to normal as experts are still figuring how best to approach the fight.

Ghana, on the other hand, is not only battling this virus but many others; corruption, insecurity, high cost of living among others. One main issue which is no longer a social menace but a threat to national security is Streetism. Though unconstitutional, streetism has become the go-to option for children who feel unsafe in their homes or those who believe life on the streets makes them “hard guys”.

In 2017, the then Minister of Gender and Social Protection, Madam Otiko Djaba at the launch of a project to kick-start an operation to get people off the country’s streets said “the prevalence of persons living on and off our streets was a measure that our governance structure and interventions were inadequately addressing the need of the vulnerable.”

She also lay blame at the doorstep of the extended family structure. According to her, the increasing number of persons on our streets was an indicator of our weakened extended family value system. She further indicated that “the ill-effects and prevalence rate must be brought under control.”

The family may have failed to extend a helping hand to struggling members but what initiative has the government embarked on to alleviate people of these extreme financial burdens?

The “Operation Get Off the Street Now for a Better Life” initiative was launched in 2017 to remedy the problem of streetism in Ghana. 3 years on, however, not much can be said about the impact it has made. Over the years, we as a country have paid lip service to some pressing issues that demand urgent attention.

At what point are we going to realize that we are losing a great number of the country’s active workforce due to this inequality?

At this point, we want to bring to the notice of the Minister-designate for Gender, Children and Social Protection, Madam Adwoa Sarfo, the many loopholes and unfurnished initiatives in the ministry. Riding on the initiatives of her predecessors will ensure a progressive agenda especially for street-connected children and ensuring that these children are not marginalized. The ministry owns these children a course to represent their plight not only by mere words but by going far to implement the words, especially in these trying times.

As we March on into April to celebrate International Street Children’s Day, let’s walk the theme. Let’s create access for these street kids!